Next day we were off to Charter’s Towers and a Macca’s breakfast including a read of the papers to find out what was happening in the world. We headed along off road routes via cattle station roads in a variety of condition, via Scartwater at the head of the Burdekin dam. 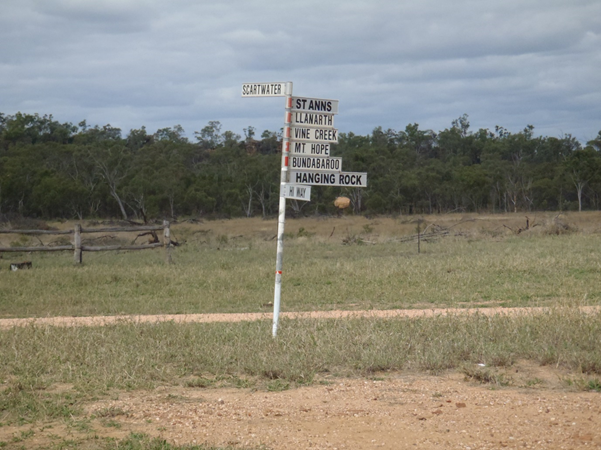 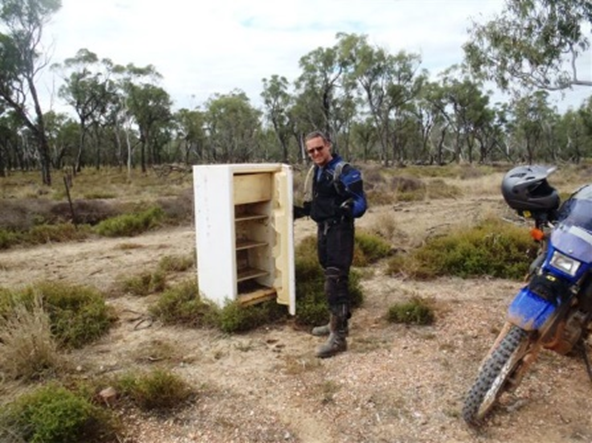 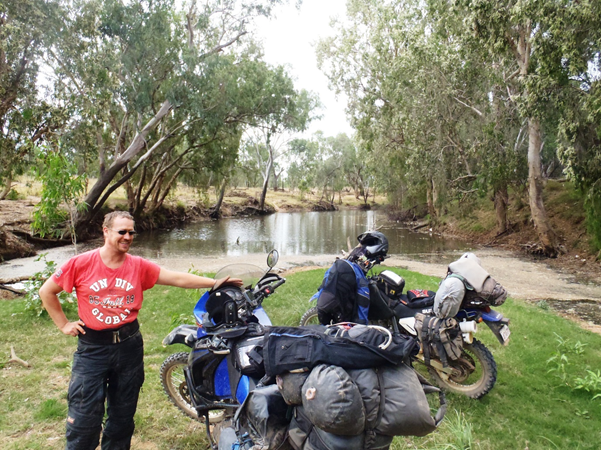 This was a little oasis in the middle of nowhere. 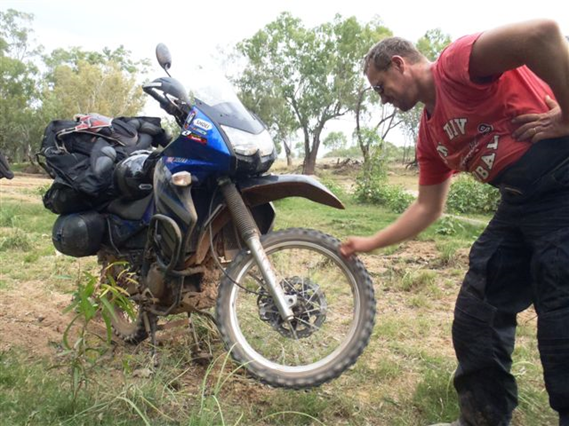 Mark checking the speedo squeaking noise that had developed. 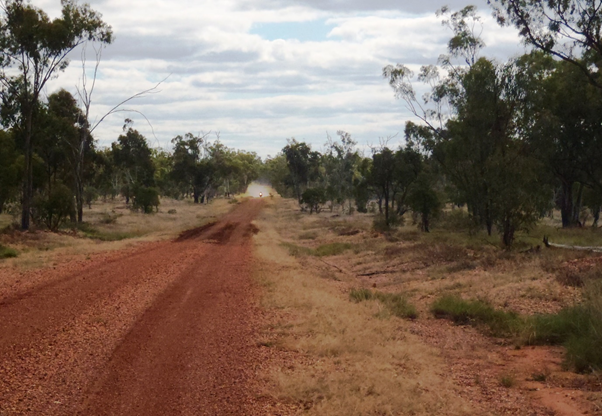 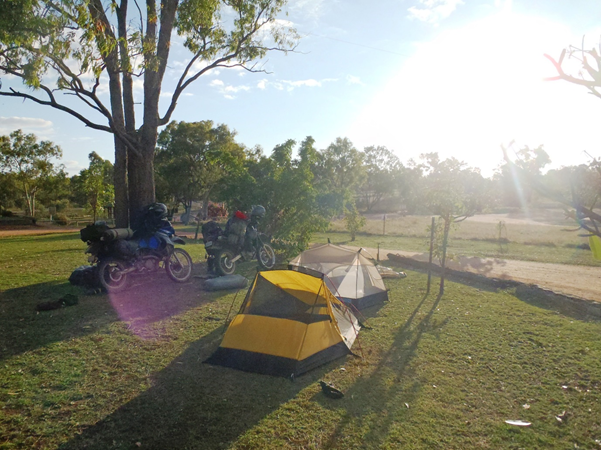 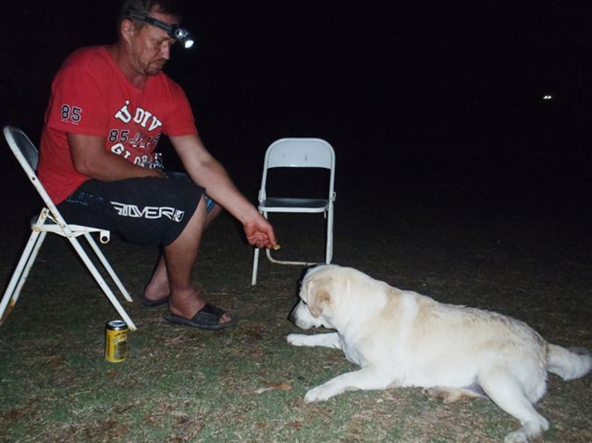 The run from Belyando to Emerald the next day was probably the most boring of the trip. After initially heading down the old road which was now single track (which was challenging including an off by Mark) we spent the rest of the day on open dirt roads with monotonous landscapes. It improved a bit as we came into Rubyvale and Gemstone (old mining towns if the names didn’t give it away) and we pulled into Emerald about 3.30pm.

Mark dropped into Kawasaki to get his squeeking speedo looked at and surprisingly the shot of WD40 they gave it didn’t do a thing!

We stayed the night at Emerald with family friends Brian and Barb and pet dog Spanner who were incredibly hospitable considering our unannounced arrival. We had a great night chatting and swapping stories with fellow adventurers, Brian has many years of wild adventures up on us though! After a three course dinner, big breakky and even a packed lunch from Barb, we were fuelled up and on our way again heading east. 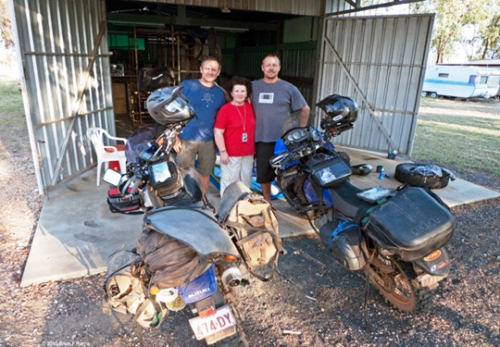 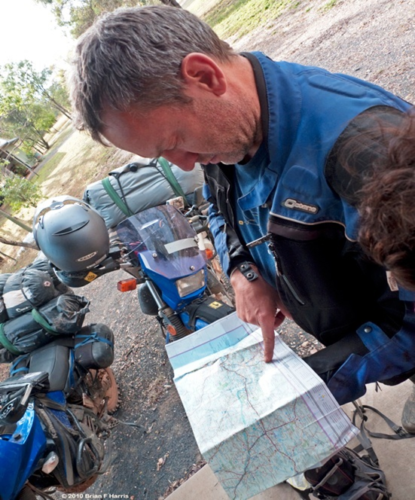 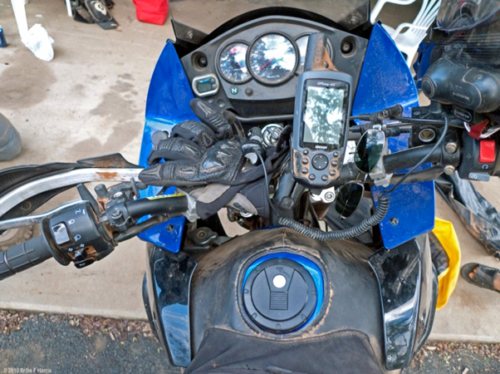 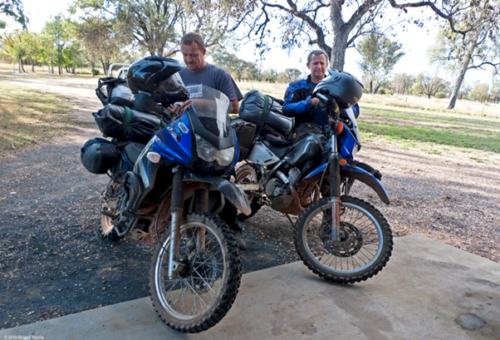 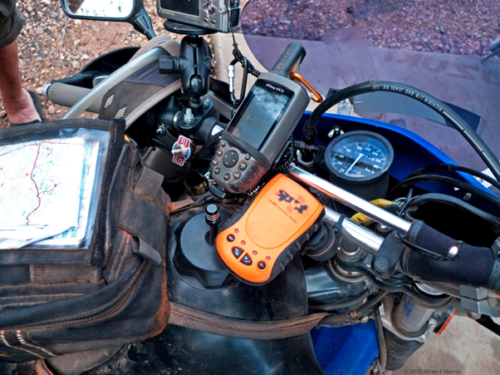 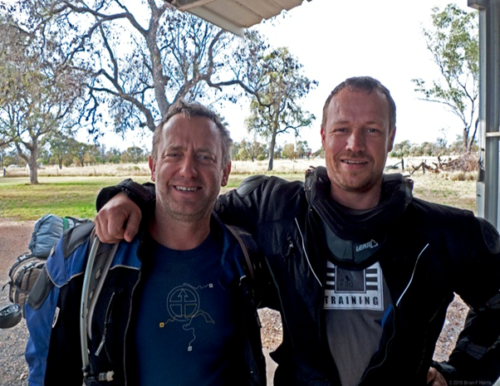 Our route the next day out of Emerald took us onto an ever-diminishing dirt road. What often happens is that as you pass each cattle station, the road gets a bit less used and a bit narrower, this repeats itself until either 1) you end up at a dead end at a station, or 2) the reverse starts to happen and the track improves as you pass stations and head toward another main road or a town. Today’s track was one of the first type and we found ourselves going through farm gates until our purple line had us following only a cow track through the scrub.

We kept going because the country wasn’t too rough and we could probably just keep going through the bush if needed until we came out the other side about 10km away. We got half way in and set up camp, once again on a dry creek bank. 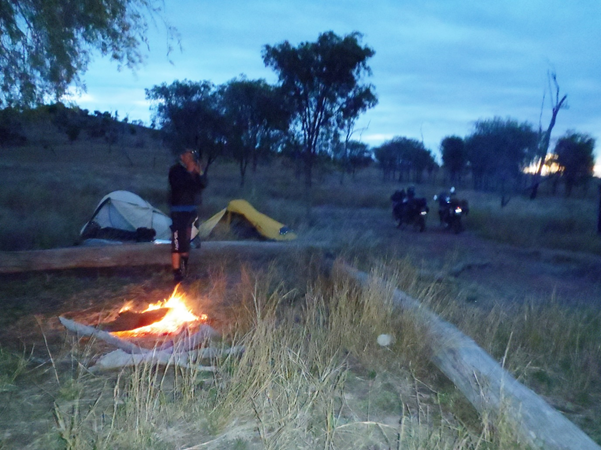 And again it was an open fire, bush sounds, the full moon and the stars for company. I was disturbed during the evening by a wild pig investigating the camp, and … very disturbed by what I thought was an albino kangaroo which turned out to be Mark on the bush toilet!

It rained a bit overnight and it also started getting colder again as we crossed the tropic of Capricorn line. We continued our journey along the cattle trails until we came up to some cattle yards behind a homestead … at least there would be a road out! A cattle dog with attitude greeted us with a fair amount of barking. We couldn’t find a gate so we had to ride the bikes through the corrals like cattle with the cattle dog nipping at our heels … yehaa! By this time we were expecting to be roped in, quartered, and branded by the owner but it appeared that no one was home. As we headed out the driveway we could see his fresh 4WD tracks leading out. We reckon the station owner would return, see our bike tracks and follow them back up the drive, across the grass, and in through the corrals and be wondering what the bloody hell took place … if only the dog could talk! 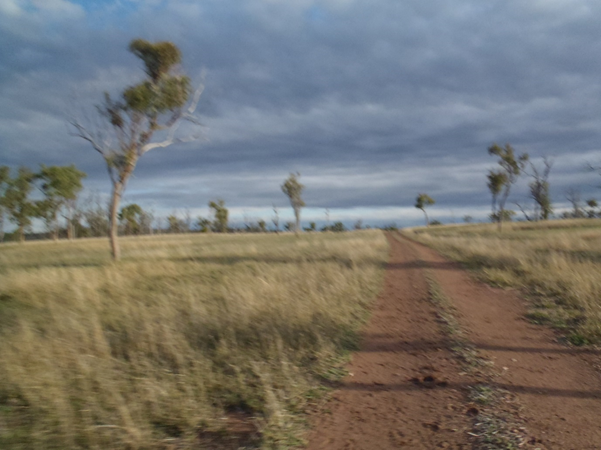 By the time we got up into the Bunya Mountains we had put on all our cold weather gear and were still chilly! We limped into Cooyar, low on fuel and considered staying at the free camping behind the pub until we saw one lonely looking character propped up on a bar stool … limited excitement here. We pushed on (much too quickly in the fading light) for Crow’s Nest where there was a pub with a fire, a meal (big T-bone), and a warm bed (two warm beds actually).

It was to be our last night on the road and we decided to make it a good one. We met a few great local characters including Barry the cowboy who manages cattle properties between Crows Nest and Chinchilla, his boss (a Ben Cousins almost look alike … steady girls this one wears a shirt and I did say almost), the local postie who rides a Honda 110 stepthrough, and the odd couple … a short guy with long hair and his tall girlfriend with short hair who do forestry work out there. Bazza was the definite comedian with some great stories. He also goes in some of the rodeo’s incl. Canungra and is looking forward to Mark and Sam hosting him and a few of his cowboy mates during next year’s event!

The last day of the ride was pretty cruisy, more so because we didn’t have too far to travel, rather than because we were hurting really badly from the big night before! We hit one dead end in a state forest where we temporarily lost each other for the first time in the whole trip. We came in through the back of Ipswich through Ripley Valley and then home to Marks. The planned route finished there and I had to find my own way home, for the first time without following a purple line!

The trip was finally ending, the bikes had performed pretty well with no major dramas and we had avoided injury, we saw some great places and animals, and met some interesting characters. It had been a massive trip and a great experience…. 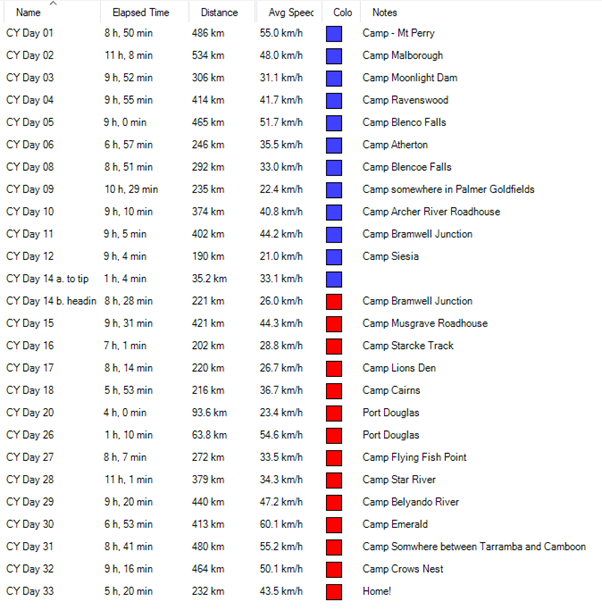 Reflecting on the trip, we would have never realized the profound impacts this trip would have on our lives. For example: Since returning home, Mark and I are both suffering “purple line withdrawal” This condition is where we no longer have a “purple GPS line” to follow every day. After spending four weeks following the purple line, and getting back to the purple line when lost, we now are a bit lost without it. Our misses’ attempts to draw purple lines to various places around the house where chores are waiting are not working very well. Mark is having more success by imagining there is a purple line to the pub. My Doctor has said that it can only be cured by creating another real purple line adventure for the bikes. Wife is not convinced and is suggesting I find a second more professional opinion.

The second problem that has arisen is Mum is suffering “SPOT Tracker Withdrawal”. She is a bit lost without being able to log in any time during the day and see where her son is. We are also following Doctors advice and trialling a rehab program for Mum where I carry the SPOT tracker whenever I leave the house… gradually phasing it out over a couple of months. 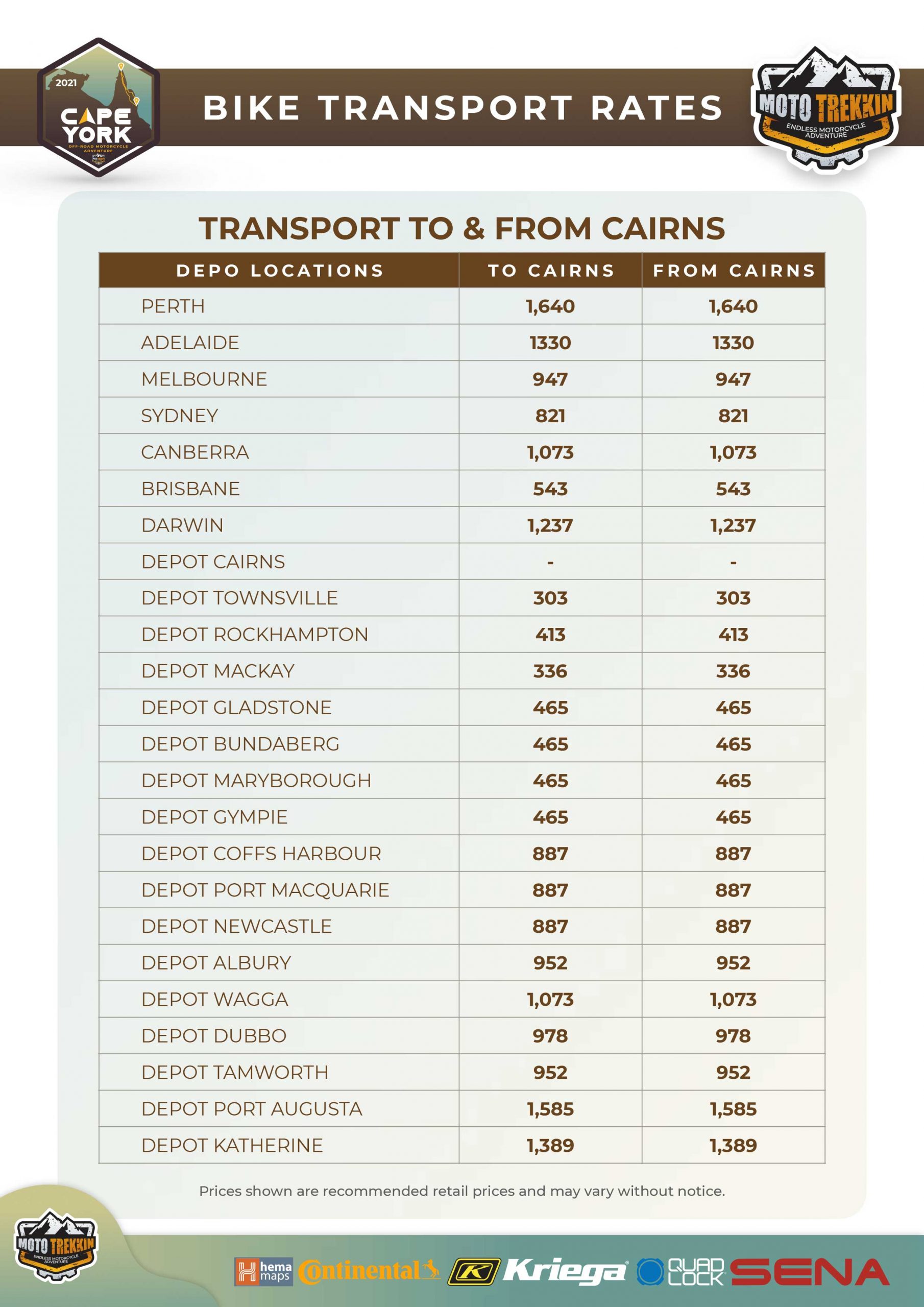